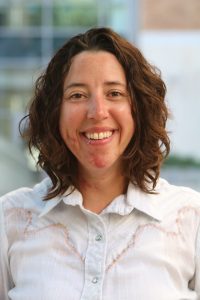 Karma R. Chávez (PhD, Arizona State University) is Chair and Associate Professor in the Department of Mexican American and Latina/o Studies and affiliate in the Department of Communication Studies, the Department of Rhetoric and Writing, the Center for Mexican American Studies, the LGBTQ Studies Program, and the Center for Women’s and Gender Studies at the University of Texas – Austin. She is co-editor of Text + Field: Innovations in Rhetorical Method (Penn State Press, 2016) and Standing in the Intersection: Feminist Voices, Feminist Practices in Communication Studies (SUNY Press, 2012). She is author of Queer Migration Politics: Activist Rhetoric and Coalitional Possibilities (University of Illinois Press, 2013) and Palestine on the Air (University of Illinois Press, 2019). Karma is also a member of the radical queer collective Against Equality, a former organizer for LGBT Books to Prisoners, and for four years, was a host of the radio program, “A Public Affair” on Madison’s community radio station, 89.9 FM WORT. For years, Karma has worked closely with several community organizations on issues surrounding queer, racial, economic and immigrant justice.